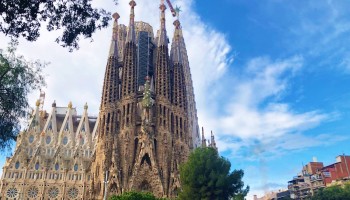 This tour is very advisable for a first encounter with Barcelona; the combination of drives by private transport and walks on foot will enable us to see a lot of the city, from the 1st century Roman colony to the International Exhibitions in 1888 and 1929, to the Summer Olympics in 1992.

A panoramic drive through the Eixample district is an opportunity to admire landmark buildings by Antoni Gaudí and other works of the time, such as Casa Batlló, Casa Amatller and Casa Milà. A stop and a walk will lead us to the amazing Sagrada Familia, still unfinished but undoubtedly a symbol of the city. The route will continue to the seafront, with the Olympic Port, the Old Port, Barceloneta beach and the Columbus Monument, where La Rambla, the city’s most famous street begins. Strolling through the narrow streets of the Barri Gòtic(Gothic Quarter) you will reach the Cathedral and the Roman Wall. A glorious finish is a short drive to the Montjuïc Mountain, to enjoy breathtaking views of the city and Plaça de Espanya. 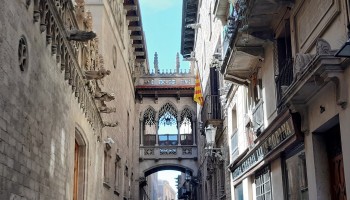 A tour of discovery as we stroll through 2000 years of history. The ancient heart of Barcelona is one of the most interesting in Europe. It includes historic buildings from the 4th century to the 21st, as well as the main pedestrian shopping area. We will visit the famous Rambla and enjoy the beauty of its buildings, the color of its flowers; the Boqueria Market, an experience for all the senses.

There are also turn-of-the-century architectural wonders, such as imposing Palau Güell, by Antoni Gaudí, and the jewel-like Palau de la Música, by Domènech i Montaner, all of them UNESCO-listed World Heritage sites.

The defensive wall built by the Romans is still largely intact. Gothic buildings to see include the Ajuntament (Town Hall), Palau de la Generalitat, the Cathedral of the Santa Creu and Santa Eulalia; churches like Santa Maria del Pi or Santa Maria are examples of the medieval past of Barcelona’s oldest district. 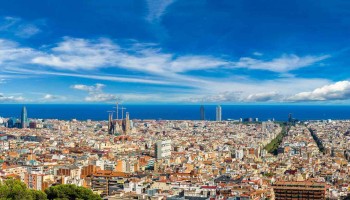 The Panoramic Visit has been designed to provide a general impression of Barcelona by private transport. It covers the main monuments and places of interest in an itinerary along the town’s main streets, avenues and squares, such as Plaça de Espanya, Plaça de Catalunya or Passeig de Gracia, with brief stops at emblematic locations like Sagrada Familia, Palau Nacional, Montjuïc, and Arc del Triomf.

This tour enables us to see much of the city, including the beaches, the seafront, and become acquainted with their role in the city’s main recent events such as the two World Exhibitions in 1888 and 1929, and the Summer Olympics in 1992. This tour is also highly recommended to fit in with other activities, like congresses, conventions, incentives, cruises, and even connected with a pick up on arrival or departure transfer. 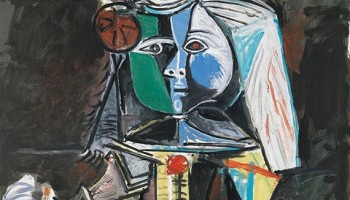 Avoid lines with an official guide. Learn about the strong link between Picasso and Barcelonacome and discover it all during a walk and a privately guided visit of the Museu Picasso (Picasso Museum).

Though Picasso was born in Málaga, when he was fourteen, in 1895, the family moved to Barcelona, where he trained at the art school La Llotja. In 1963, Barcelona saw the opening of the world’s first museum for a single artist while he was still alive.

This is without doubt the best collection of Picasso’s very early work, an outstanding display of his artistic progress.A stroll along the streets of his youth will take us to the cafeteria and tavern where all the artists and bohemian trend-setters used to meet at the end of the nineteenth century: “Els 4 Gats” café was frequented by historic personalities and witnessed the debates of the main characters. Picasso designed the menu-cover still in use.

Nearby, at the Col·legi d’Arquitectes de Catalunya, we admire the frieze designed by Picasso in 1962, and his ability to synthesize in depth. 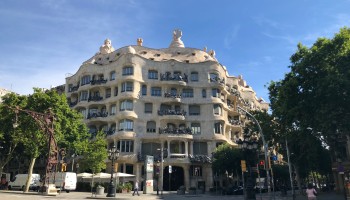 THE EIXAMPLE AND "MODERNISME"

From about 1888 to 1914 an ornate new style took over, which had different names in different countries; here it was”Modernisme”, roughly equivalent to “Art Nouveau” in France.

Barcelona is much more than Antoni Gaudi; in the early 20th century great works of architecture were signed by renowned architects such as Lluís Domènech i Montaner, Josep Puig i Cadafalch, and others. Many are concentrated in the Quadrat d’Or (Golden Square), several blocks of the Eixample district near Passeig de Gràcia, Rambla de Catalunya and Av. Diagonal.

The Eixample district resulted from the Plan Cerdà to extend the city, which started by demolishing the medieval walls in 1860. With the financial support of Catalonia’s wealthy families, the city became a showcase of refined, ornate and elaborate houses in the fashionable style of the time, “Modernisme” (1880-1920, Art Nouveau). 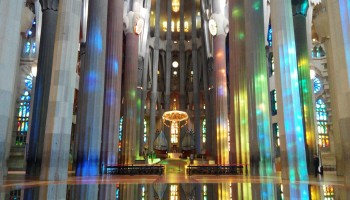 This tour will bring us close to the most outstanding works of Antoni Gaudí, to understand his architecture and the period of splendour in Barcelona in the early 20th century.

The Park Güell is a UNESCO World Heritage Site, and its inspired design makes it the epitome of Gaudí, a symbol of the city. As a result of Gaudí’s close acquaintance with the landowner, the wealthy industrialist Eusebi Güell, the park was planned to be a residential development inspired in the British “garden cities”.

However, despite the healthy location and excellent views, the project failed, so it became a public park with an artistic legacy of unbridled fantasy and color. Sagrada Familia is a unique basilica, Gaudí’s and Barcelona’s most famous building. Though still unfinished, the majestic dimensions leave no-one unmoved.

The exterior has 18 towers that rise to a great height; several are still rising. The interior is full of colored light from the stained glass windows, making it the architect’s most original work, an item that should not be missed. The façade of the Nativity is listed as aUNESCO World Heritage Site.

Finally, on Barcelona’s most exclusive avenue, Passeig de Gràcia, we’ll enjoy exterior views of two upper class apartment buildings built by Gaudí for wealthy families of the early 20th century,Casa Milà (called La Pedrera), and Casa Batlló; next to them are other landmarks of that amazingly creative period. 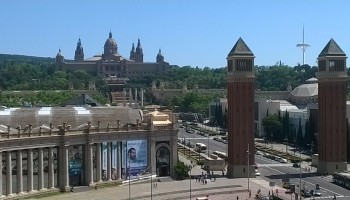 The Park of Montjuïc, Barcelona’s largest green area, combines nature, art and sport. Some of the most important museums in the city are here, like the Museu Nacional d’Art de Catalunya (MNAC) and the Fundació Miró (Miró Foundation).

Nearby are the sport installations from the Olympic Games in 1992, the OlympicStadium and the Olympic Museum. The International Exhibition in 1929 was also installed here, leaving us the pavilions designed by Puig i Cadafalch, the Palau Nacional, the famous Font Màgica by Carles Buigas, the Poble Espanyol (Spanish Village), the German Pavilion by Bauhaus architect Mies van der Rohe, and Plaça d’Espanya.

Lovers of nature will find several botanical gardens within the park. There is even a castle at the top that can be reached by a suspended cable car. Various viewpoints provide outstanding panoramas over the city.

Nowadays the Park of Montjuïc is an undeniable pleasure for all to enjoy. 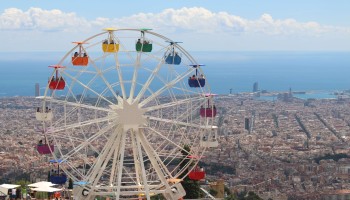 This is a relaxing visual itinerary to let you be gently driven, with occasional stops and short walks, designed exclusively to see the city and take pictures from its three best angles.

Montjuïc has two wonderful but opposite views, to the Old Town, the port and the sea; or inland, past the installations of the International Exhibition in 1929 and the Plaça d’Espanya, towards the Serra de Collserola, the chain of mountains behind the town.Maremagnum, the shopping mall in the middle of the port, lets us see almost the entire city from the sea; the Columbus Monument, the traditional tour-boats of the port, called “Golondrinas”, the World Trade Centre and the fishing wharves.Finally, Tibidabo, the highest peak of the Serra de Collserola, at 512 m., offers a magnificent panorama of the city and the entire region of Barcelona. Crowning the mountain is the Church of the Holy Heart and the Tibidabo Amusement Park. 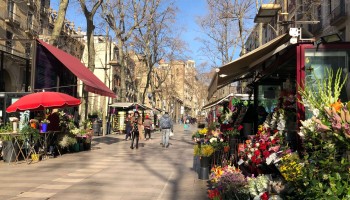 We make tailor made tours

We adapt it all to the needs of each group and make visiting our city a unique experience. Consult us to find the itinerary best suited to your preferences!

Here are some of the possible examples:

Explore the district of Gràcia; get lost in the Laberynth at Horta; wander into the “22@” district, take the Contemporary Route, participate in Sporting Barcelona, revel in the local Markets, taste infinite different Tapas, discover Roman Barcelona, relax in the Parks, be amazed by the Graveyards Tour, smile along the Rambla, etc.Apit-Barcelona has guides specialized in school groups and students.

Very adequate for these groups are the Roman tour with the Barcelona History Museum (MUHBA), the Medieval Tour, the Miró tour or the Picasso tour, The Tàpies Foundation, the Catalonia History Museum, the Parc de la Ciutadella, and more.